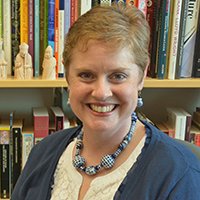 About Academic
Charlotte is an associate teaching professor specialising in comparative arts and letters
American
About Research
Year of research: 2015
Art History
Qualitative
Published in: The Boydell Press
Connect with Charlotte
Email Academic

My research studies underrepresented groups who are generally too poor to leave a written documentary record through traditional venues such as property deeds or wills.

My research focuses on architecture of the later European medieval period. The structures I study range from religious to secular, large to small: both cathedrals and parish churches, palaces and more modest domestic structures. My particular interest deals with experiential questions such as who built these structures, and why? Who entered inside those spaces, how did they use and experience those areas? I am particularly interested in the experiences of women, and what evidence can be found for their participation in building work in premodern times. My studies are primarily of interest to academic audiences but may provide historic background for global communities and governmental agencies to examine past patterns of behavior, with the hope for better and clearer inclusion for underrepresented groups.Among the specific buildings that I have focused on in my research are the Savoy Hospital in London, and Hampton Court Palace in England. My work on the Savoy Hospital records in particular reveals patterns of employment for workers low on the social hierarchy, as they labored to build a prestigious, royally sponsored charitable institution. This published work, like my current work on the early sixteenth-century construction at Hampton court Palace, helps demonstrate how careful analysis of written historical evidence can build a picture of the lives of individuals who lived humble working lives and owned little to no property. This applies especially to premodern women. My research studies underrepresented groups who are generally too poor to leave a written documentary record through traditional venues such as property deeds or wills.

This research made an analysis of the payrolls preserved in this manuscript allows an opportunity to understand more about the working conditions and value (through pay amounts) for laboring class English artisans in the early sixteenth century, including a few women.

We are limited by the historical record, and cannot find answers to all questions. Those who kept the records had different goals and values (notably tracking financial expenditure), not an interest in recording details of workers’ lives.

The Building Accounts of the Savoy Hospital, 1512-1520. Critical edition, with introduction and notes, of Westminster Abbey MS 63509. Boydell Press, 2015.

About Research
Year of research: 2015
Art History
Qualitative
Published in: The Boydell Press
About Academic
Charlotte is an associate teaching professor specialising in comparative arts and letters
American
Connect with Charlotte
Email Academic